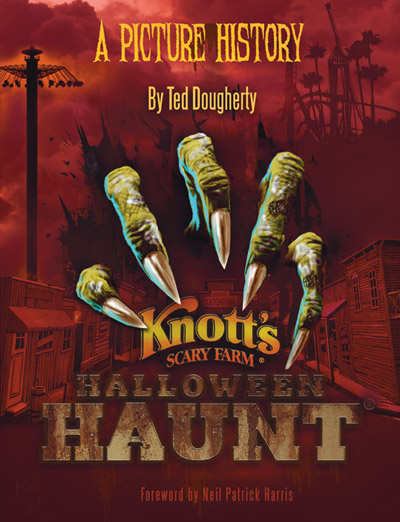 A NIGHTMARE COME TRUE!
THE HISTORY OF THE KNOTT’S SCARY FARM HALLOWEEN HAUNT IS UNLEASHED!!

Through a fascinating display of archival photographs (most of which have never seen the light of day) and  meticulously-researched ghoulish details, author Ted Dougherty throws the switch and brings to life the forty-year history of an event that has terrified millions of helpless victims. The shrouds of mystery as to how the event became such a monster are lifted as the first book on the event demonstrates how “America’s First Theme Park” conjured a three-day affair in 1973 and created a legacy that has gone on to influence hundreds of copycat events
across the globe.

Filled with over 300 photographs which unveil terrifying artwork, eerie ephemera,behind-the-scenes thrills and of course, ghoulish monsters, Knott’s Halloween Haunt – A Picture History is unlike any book that has been let loose on the public.

“This is a joy for anyone who wants to relive their childhoods at Knott’s, and a jackpot for readers  looking to understand (and revel in) the amazing phenomenon of October terrortainment” states Halloween historian and author of Halloween Nation, Lesley Pratt Bannatyne. Containing over ten years of research, the event’s 40-year history has been cunningly butchered into a story outlining how a Southern California Halloween tradition became a world-wide phenomenon.

KNOTT’S HALLOWEEN HAUNT – A PICTURE HISTORY IS A SCREAM!

Nightmares become living reality each year in the dark shadows of America’s first theme park. Thousands of ghoulish creatures have terrorized millions at Knott’s Scary Farm since 1973 and here, for the first time, a written history with over 300 monstrous images is unleashed.  See what some ghouls are howling about Knott’s Halloween Haunt – A Picture History:

“For the Haunt fan who can still vividly remember Seymour, the “Master of the Macabre”, or that first spooky trip into the transformed caverns of the Haunted Mine Ride, get ready to rediscover nearly 40 years of fears that formed the reputation of the world’s scariest Halloween party,” shrieks Tony Baxter of Walt Disney Imagineering.

Christopher Merritt, author of Knott’s Preserved screamed, “Growing up as a teen during the 1980s in Southern California, Knott’s “Scary” Farm was a big part of my formative years, and this book made me relive it all over again. Rare concept art and photographs from the formative years of the Haunt are in abundance here. There are so many untold stories and interesting facts behind what has become an often imitated, but never surpassed Halloween event. Anyone interested in theme park or Halloween history won’t be able to put this down – highly recommended!”