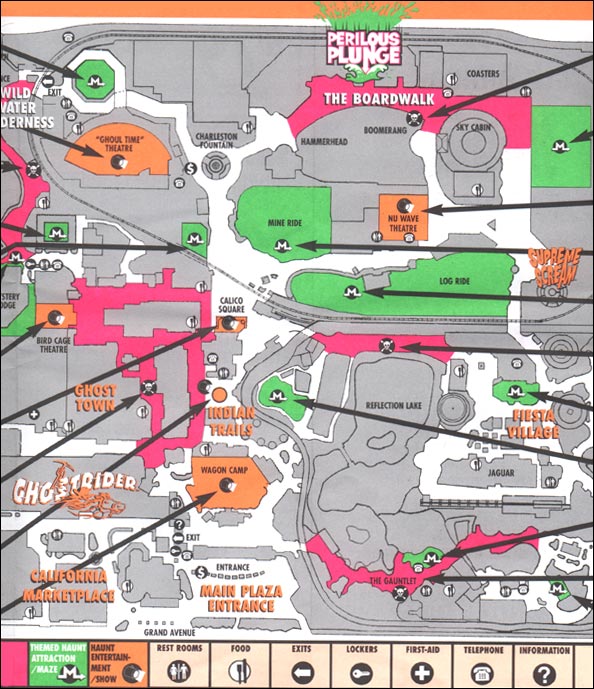 CARNIVAL OF CARNIVOROUS CLOWNS:
This maze was the winner of the first ever “Ultimatehaunt.com Maze of the Year:  The People’s Choice”.  Typically referred to as “C3,” the maze was the first at Knott’s to introduce chromodepth (3D) technology to the event. The maze intertwined with the “ghost” of WINDJAMMER. With the closed coaster still standing, the theme of the maze was complimented, in a true haunting sense. Although the clown concept was used in the past by Knott’s (Carnival of Death and Uncle Ernie’s Madhouse), the theme was never presented like this. A truly innovative maze that proved yet again, Knott’s Scary Farm Halloween Haunt is at the top.

VOODOO WITCH PROJECT:
To clear any misconceptions, the ideas from the Blair Witch Project were not really used. Although tidbits here and there hint upon the movie, the maze held a different concept. Similar to past themes like “House of Maniacs”, the inbred family vibe filled the maze. Knott’s Berry Farm’s description/story line can pretty much sum it up: “Cross the bridge and you’ve crossed over the threshold of fear into the Alabama back country where the only settlement remains subjected to a 100-year-old curse by an outlaw witch. Legend has it this half-human entity has decimated the local township in search of living sacrifices to satisfy an unspeakable cannibalistic voodoo cult. Surviving local townsfolk who aren’t afraid to talk warn of secret spells, fanatical rituals, broken amulets and a maniacal inbred family with an unquenchable hunger for dinner guests! Suddenly, it’s no longer a silly student documentary project – but a race for your life!”

GOTHIC GRAVEYARD:
Dominion of the Dead was a very hard act to follow. Gothic Graveyard did not have as many strong points compared to the two other new mazes introduced in 2000. However, the talented monsters in the maze were outstanding. There were strong points, but it is hard to avoid trying to compare it to Dominion of the Dead (since the overall themes attempted to be similar).