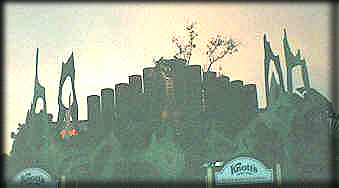 TIMOTHY L. EERIE TIME MACHINE (Fiesta Village):
A truly unique masterpiece of a maze.  Guests walking-into the maze a choice of three pathways they could walk into: Tune In, Turn On or Drop Out.  As “Purple Haze” was played through the loud speakers, hippie corpses ran around scaring everyone. The walls were painted with bright florescent paints, peace symbols, and flowers. A psychedelically painted spin tunnel was one of the main highlights of the maze. Showing undead Vietnam victims was another theme in the attraction. The mix of the dead hippies and the 60’s music was a perfect example of how the dark humor of the Haunt is used. GOOGLE

THRESHOLD OF DOOM (Calico Mine Ride):
The Calico Mine Ride really was a perfect setting for an Aztec theme. Although the Mine Ride has the feel of an actual mine cave, the decorations for the “Haunt” were so elaborate, it hardly seemed like the same ride. Complete with Aztec chants through the loudspeakers and costumes to match the theme, the train worked as a time machine back to another world. The train stopped to view a human sacrifice (which has been brought back for later scares in a Greek mythology setting), and a enormous dragon in the main opening of the mine let out loud roars during the ride’s peak. The same theme was used for the following couple of years because it was so outstanding.