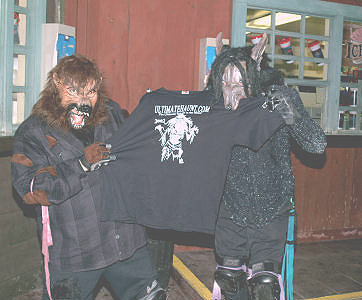 **Above are images from the 30th Annual Halloween Haunt. More will be added shortly. If you have any pictures that you would like to see on the website,email them to us and we will be sure to find some room for them somewhere! Enjoy!
We thank those of you who sent in all of you awesome pictures to the website! If the pictures that you sent in have not been used in either of the above links, we’re more than likely planning to use your pictures in another section of Ultimatehaunt.com…so keep your eyes peeled!**

Can we just tell you that CURSE OF THE SPIDER is incredible? The Knott’s Haunt Crew proves once again that they are the masters in utilizing space. This maze packs a serious punch! We realize that “Curse of the Spiderwoods” was pretty weak in 2001 but this NEW version is a night and day difference and IS a maze. You will NOT want to miss this maze!!

How about ALIEN ATTACK? Very cool! Yes, it’s different this year and some of your oldie but moldy favorites have returned! If you’re a Haunt lover, you’ll love this one!

FRIGHT FESTEVIL!!
You cannot skip this maze! Some VERY cool and surprising changes have been added! One recommendation: Pay attention to DETAIL! Knott’s FINALLY got rid of the Motel doors that have been present since Baits Motel! Thank God!

CARNIVAL OF CARNIVOROUS CLOWNS:
If you think Knott’s is going to let up on their clowns, you got another thing coming! Some fun additions have been added so PAY ATTENTION!

BLOOD BAYOU:
Packed full with “All Star” talent, this maze is even MORE warped this year!! The size of this maze alone carries a huge amount of weight in the wonderful world of Halloween Haunt.

MALICE IN WUNDERLAND:
Being the Ultimatehaunt.com Maze of the Year 2001, this maze is packed full of killer eye candy and Malices, Malices and more Malices!

THE UNDERGROUND:
Yes, this theme has been around the Haunt since Industrial Evil, however, the changes to this maze in 2002 are very disturbing and twisted. Tell us what you think about the additions on our Message Board!

THE INQUISITION:
A real oldie but goodie! The talent had their timing down when we went through, so watch out behind all of those tight corners!!

LORE OF THE VAMPIRE:
Okay….here goes. Dominion of the Dead dominated the world of Halloween Haunt. Gothic Graveyard and last year’s Lore of the Vampire didn’t quite match up to the original Haunt vampire mazes. This year, we were VERY surprised. You will enjoy the long narrow hallways mixed with the tight corners which will put you face to face with some crazed vampires! The new scenes in this maze are killer and the talent in this maze were just rockin’! And of course, pay the Queen a visit….she won’t let you down!

RED MOON MASSACRE:
A SERIOUS improvement! Packed full of howling talent, the deathly beautiful Little Reds and lots of killer werewolves, this attraction was able to capture the excitement that it hasn’t had in around a decade! We STILL recommend that you go on this attraction FIRST to beat the lines!! You won’t be let down!

ARMY OF THE UNDERWORLD:
The decorations and talent still can put you on edge in this classic attraction. Don’t forget, this attraction (along with the Log Ride) has been around for ALL 30 years of Halloween Haunt. A classic!

IN CONCLUSION, ALLOW US TO SAY THAT THE TALENT BROUGHT THESE MAZES AND ATTRACTIONS TO LIFE!! Everyone did an outstanding job!!! Our hats go off to the Haunt Crew for creating and building such an incredible Halloween Haunt. Knott’s is STILL the best and NOBODY else will touch them.