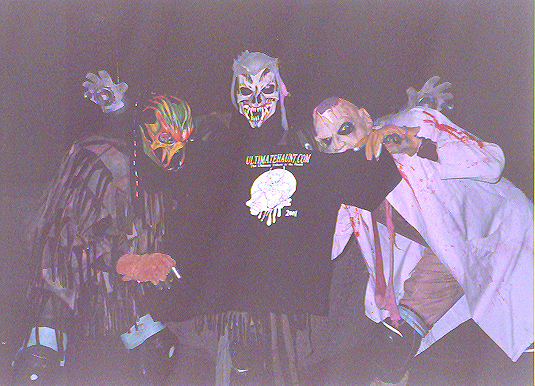 What’s the key word for Halloween Haunt 2001?? Mazes, Mazes and Mazes!!! Halloween Haunt was dominated this year with an incredible amount of incredible mazes!!! Even the returning mazes had great twists to make them even more entertaining than what they were in the past!

Let’s start with Carnival of Carnivorous Clowns in 3D. This maze was placed into a new location this year: The Buffalo Nickel Arcade. Long narrow hallways that were present in 2000 were replaced by tight twists and turns to allow the Carnivorous Clowns more access to greater scares. The additions to this maze were hilarious and the returning sets and characters dominated the concept and theme. Many people felt that this maze was better this year than it was last year. They also brought in some incredibly amazing new 3D effects that were outstanding!! This maze is definitely proving itself to have the lasting power that Dominion of the Dead had in the past.

Blood Bayou.
This maze actually begins the same way that VooDoo Witch Project began, but it ends nowhere NEAR the same!! This maze takes visitors through a creepy world of inbred, murderous freaks as well as the creepy world of voodoo. Although the description may sound familiar to that of VooDoo Witch Project, it was MUCH better!! New props and sets were brought in to completely define this as a great maze!

Elvira’s Red Moon Massacre:
Mixed feelings come out of the woodwork on this attraction. Personally, I thought the theme was absolutely incredible!! The concept were great!!! However, a few things didn’t quite work out. First off, Elvira is not really in the attraction. Second of all, in the distant past, the themes for the Log Ride were decorated throughout the attraction (ex. Toxic Terror). Lastly, the props didn’t all work and it was sort of difficult to decipher what some of them were. All in all, this attraction is a great start and hopefully it will be fine tuned next year.

Curse of the Spider Woods.
If you went through this attraction, you will know what we mean when we say that this attraction had an incredible build up. However, the peak of the attraction failed to achieve the scares that can be found in the rest of the park (mazes OR streets). The concept was wonderful, but much like the Log Ride, this attraction will hopefully be improved next year.

The Cryptkeeper’s Horrorwood Fright FestEvil:
Two rooms were different (as far as we could tell). The introduction and the end. However you try and cover this maze up, it has still been basically the same theme for almost a decade. The new rooms were great and if the particular theme of the introduction room stayed constant throughout the maze, it would have probably been much more entertaining. However, this maze is a fan favorite, so you decide on its lasting power.

Lore of the Vampire was simply awesome!! It was improved upon 100% compared to last year’s Gothic Graveyard. The maze was at least twice as long and the overall theme was ingenious! Vampires through time. Hints of Anne Rice’s Queen of the Damned began the maze with the Egyptian theme, while it ended with the Lost Boys. The maze included everything that the vampire fans would love and more! Hopefully this maze will stay for years to come. At the rate that Knott’s Berry Farm improves on their mazes, this particular maze will be mind blowing within the near future.

The talent reminded us a bit of a mixture of Mother Noose’s Scary Tales mixed with the dialogue that Lair of the Vampire had (if you are not familiar with these mazes, take our Haunt 101 course in our THROUGH THE YEARS section). As we went through, Malice would welcome us into her world with bits of spiel and were well acted out. The White Rabbit greeted everyone into the maze and was obviously very late! The Mad Hatters were all crazed during their unbirthday party! These are just three examples of what was happening in this maze. EVERY bit talent that we saw were outstanding!! Some of them were scaring while others were simply acting their roles.

The 3D in Malice was incredible. The ideas of how the 3D was used blew our minds (and hopefully yours too, if you went through the maze!). In the future, we will be bringing you some in-depth pictures of what was used in the maze, so be sure to hang onto those 3D glasses!

The returning mazes were awesome as well! Each maze had a little something new to it this year which is one of the factors that make the Knott’s Scary Farm Halloween Haunt mazes the best! The Underground has run it’s course. Although a couple of new additions were brought in, they were not enough to keep the maze up to the caliber of the other attractions in the park. Inquisition was fantastic and the end presented a few cool twists. Alien Attack and Army of the Underworld were other attractions that returned and still pack a great punch.

What about the street zones?? Well, Ghost Town certainly is always going to be the top and it’s no different this year. A handful of new characters have come out from Boot Hill this year. We will be displaying some of their pictures soon, so keep your eyes peeled.

The Swamp was much better this year than it was last year. They have now added many more monsters, sets and even some Sliders! This Scarezone has proven itself a lasting spot at Knott’s Scary Farm. The props in this Zone really set the mood of what it’s supposed to be. The monsters really do work every single inch of the Swamp. It will be great to see what the future holds for this ScareZone now that it has been established as a permanent resident at the Haunt.

The Gauntlet again is amazing this year. Practically every single character has new costumes than last year. Many more faces and creatures have filled C.S. Streets this year and they are once again outstanding. As you have seen in our Haunt history and Zones section, C.S. Streets grows and grows every year. Again, they performed skits and acts proving to be an incredibly entertaining Scare Zone.
The Pre-Scare Dinner is a fantastic bonus yet again. We were able to hit 7 attractions by 8:30pm. I still highly recommend going to the dinner.

All in all, another fantastic Halloween Haunt. New characters and mazes have really taken the Halloween Haunt to the next level. As always, as the year goes on, we will bring you more updates so we don’t ruin any of the wonderful surprises waiting for those of you who have not been yet. We will continue to bring periodic updates to keep the excitement up all year long!