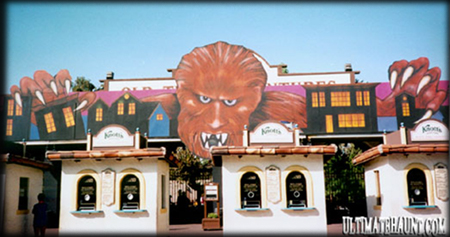 SLASHER OF THE DARK (Kingdom of the Dinosaurs):
Taking place inside of “Kingdom of the Dinosaurs”, the “Slasher of the Dark” carried a Jack the Ripper  motif. While waiting in line, radio “warnings” of a slasher on the loose were played over the loudspeakers.  All of the lights were out during the ride, and very few monsters were inside scaring people. Not much in the way of decoration was present in the attraction. 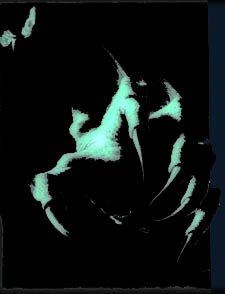 CARNIVAL OF DEATH (Ghost Town):
The maze was packed with small, medium, large, and extra large clowns. Of course, the clowns all looked lunatic and deranged. Knife throwers, ugly circus animals and a strange Ringmaster were all included in this outrageous maze. As Knott’s put it, “a bizarre big top filled with the most horrifying circus creatures imaginable”.