SANTA CLAWS MOUNTAIN (Timber Mountain Log Ride):
The crazed humor of the Haunt really shined for this theme. The scenes were gruesome, and usually hilarious…including Santa Clause as a demented axe-murderer, skeletons singing “Ghoultide Carols” and even deranged-looking snowmen. The sound effects were strange versions of Christmas carols that were very bizarre.  Some pictures from Santa Claws Mountain can be seen at the bottom of this page.

The year that Knott’s introduced “Nightmares,” the mazes from that point forward were changed. A new bar had been set. The dreamy, surreal theme was ingenious. This maze struck all senses with lighting, sets and music. The maze began with a greeting by a belly dancer who moved around stone pillars. The stone settings, star themes and mirrors were all introduced with the coming of “Nightmares”. All of the camouflage costumes and hooded figures were also used. Nightmares was certainly one of the great mazes Knott’s ever offered. The music also added to the atmosphere as well. The theme used at that time was from Peter Gabriel’s “Passion” album (the soundtrack to “The Last Temptation of Christ”). This music fit perfectly.

Ever see “Deliverance”? That is basically what the point of this maze was. Weird Appalachian Mountain-types of music were played over the speakers. Demented family portraits were hung on the walls giving the idea of what to expect. The sets were set-up like the inside of a house, which included a kitchen scene, living room, and garden area, all of which were packed with inbred-types of monsters. Throughout the years, the “Bear-y Tales Playhouse” has been a great place for the different mazes used. The narrow walkways and staircases really put one right in the action. “House of Maniacs” was the perfect theme for this type of building until the building was removed in the late 2000’s.

ED ALONZO’S “CLOSET TRICKS” (Cloud 9 Ballroom/Bird Cage Theatre):
Since 1993, Ed Alonzo has performed his magic show at the Haunt. Every year since then, his show has been voted the best at Halloween Haunt (according to the man himself!). His show began in the Cloud 9 Ballroom, but has since moved to the Bird Cage Theatre and even into the main stage. 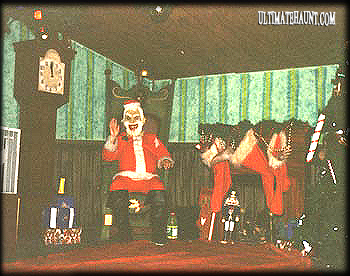 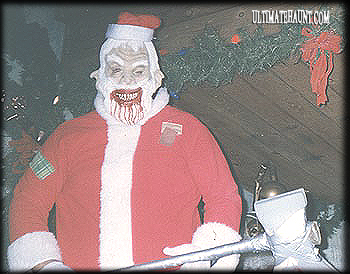 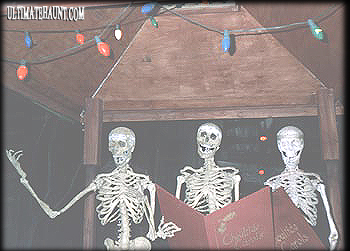