BAIT’S MOTEL (Wilderness Dance Hall):
Although this maze improved in many areas over the years, it is commonly felt that the original was the best. The “Psycho” motel theme stayed fairly constant throughout the maze. As guests walked through violent bedroom scenes, blood baths, demolished living rooms, and gory kitchen sets, the screeching violin music from “Psycho” blared. Some rooms strayed from the motel theme (especially in the later years of the maze’s run). For example, a large checkered room with strobe lights was used. Over the years, Knott’s has shortened the effect. In fact, we only see parts of it used nowadays in other mazes (like “Elvira’s Nightmares” in 1999), but unfortunately not in the large scale that it was first used in the “Bait’s Motel”. 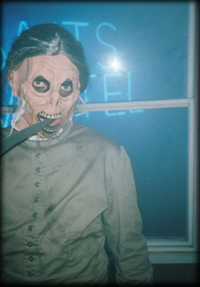 TOXIC TERROR (Timber Mountain Log Ride):
This was a very unique theme for the Timber Mountain Log Ride. The reason because (at least since 1988), Knotts has only used the “Toxic Waste” theme for the Log Ride this one time. Although Knott’s used the “Toxic Waste” theme for other mazes, they never brought it back for the Log Ride. The decorating for this ride was fantastic. A toxic waste truck was parked in front of the entire ride. Fluorescent green ooze seeped everywhere from the tanks of the truck. The entire ride kept up with this theme with “Radiation Warning” signs, distorted people and animals, and of course, lots and lots of green goo. 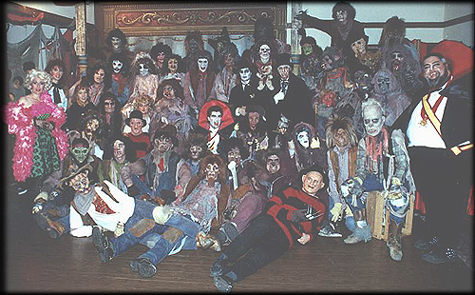